The seed company is a relatively new type of business, only gaining a foothold in the last 100 years or so with the advents of seed patents and hybrid seed technology. However, back before the seed companies controlled the breeding, production and supply of seeds, farmers were in charge of their own seed stocks. (Well, there was awhile when the federal government and land grant colleges played a crucial role too, but that’s beside the point). Back in the day, farmers had to make sure that they didn’t harvest and sell their entire crop for food, but that they also kept enough plants for saving seed, so that they would have seeds to plant the following season. This process inevitably begs the question: which plants did they sell/eat and which plants did they save for seed? Were the seed plants chosen at random? Did they just save the last few plants that happen to remain in the field toward the end of harvest? Hopefully not. Saving seed gives the farmer the chance to choose the most productive, flavorful, disease-resistant or well-adapted plants to pass on their genes, while culling out all the rest. Thus, most farmers were also de facto plant breeders, actively sculpting the gene pool of their crops toward more productive, resilient futures. Here at Deep Harvest, we are no exception. We’re constantly making choices as to which plants to harvest for CSA, and which to leave for seed saving.
This week planted three different over-wintered root crops for seed: Hilmar Carrot, Touchstone Gold Beet and Tokyo Market Turnip. Most root crops are biennial, meaning that they flower and produce seed their second season of growth after undergoing a winter vernalization period. The roots can either vernalize in the field, or you can harvest them and store them in a damp, cool environment.  We chose the latter.
Let’s take beets for example. The first step was to harvest an entire bed of beets and line them all up in a row, over a thousand in total. Then we walked the row and took out the obviously ugly, damaged, or insect-ridden roots. These got tilled into the field. We then evaluate the remaining roots for several preferred traits such as round shape, lack of hairiness, strong tops, dark color, large size and absence of insect damage or disease. We chose the best 200, cut off the stems, and put them into bins surrounded with wood shavings. The rest went to CSA and restaurants. We chose 200 roots because you need at least 80 as a minimum population size to prevent inbreeding depression, and we can assume that many will rot, freeze or get discovered by mice in storage, or perhaps meet other grim fates after replanting next spring. The hope is to have enough survivors to ensure a successful seed crop for harvest in summer 2019. We could have just left them into the ground all winter, but them we’d miss out on the wonderful opportunity for some casual plant breeding. This week the soil warmed enough to replant the roots in rows in the field. Soon they will begin sending out new leaves, followed later by a bolting shoot and flowers. Seed will follow! 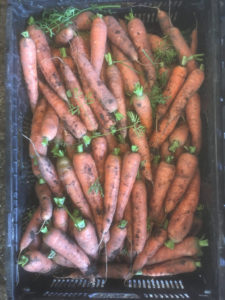